Spot the Arab is a project based on portraiture by Australian artist John McRae, as a summary of various themes, ideas and concepts aligned to how he  reflects upon contemporary issues of religion, race, gender, orientation, nationality and freedom. He presents his work at Galleria Il Ponte Contemporanea in a game-like yet very serious manner. It is a topical celebration of diversity, with a powerful message about tolerance.

“The solo show has been built around a large photo installation, a retrospective of my portraits since 2002 on the theme of the illusions and stereotypes of what is an Arab today. This looks at 20 people, photographed over the past decade in numerous countries and from different religious and ethnic backgrounds. Each person poses with props, often imposed by me, and enacts the role of what they consider an Arab to be today. The sitters include men, women and transgender people in the “guise” of Arabs, Muslims or people of the various factions of Islamic faith. It focuses on social fictions of femininity/masculinity, recurring themes in my work. I have asked each model to exactly describe how they identify, since in this way, we can over-ride preconceptions, stigma and prejudice.”

“I tend to create works in series, often spanning different continents and time-lines, so that my shows introduce a multi-faceted and shifting perspective, never a single cultural viewpoint. My specific fascination is using the camera to break down stereotypes and visual codes, and today, this is more important than ever. In my portraits, I try to capture sly or hidden messages, and then juxtapose these with more blatant aspects of drama, styling and emotion, whether it is authentic or staged. It is always about intimacy versus theatricality.”

Ali, a Lebanese-Australian national raised in Paris but who is currently based in London, has frequently modeled for McRae over the past decades. He, for example, provides a sharp description of how he defines his own identity. This gives additional weight to the complexity of McRae’s portraits.

“My ethnicity is Arab, I see myself as Semitic too. I also  have Persian lineage,” Ali explains. “Gender is very fluid in the male body that I adore, so I project Macho Male. My religion: Agnostic, Neo-pagan, Baphomet Worshipper, Hermetic Qabalist, Neo-Platonic, Sacred Whore (I go as ‘London Arab Master’ these days). I love Shia-Islam too.”

This is John McRae’s fifth exhibition at Galleria Ill Ponte Contemporanea in Rome since 2005. John McRae’s work is primarily portrait-based, as demonstrated by his solo shows at GrantPirrie Gallery (Sydney), Mate (Berlin), ACAF (Shanghai and Sydney) and The Center (New York); such group shows as La Folia (Madness) curated by Achille Bonito Oliva for the 2010 in Ravello Festival in Italy, and Sailor Style at the National Maritime Museum in Sydney; his inclusion in many Australian portrait prizes (People’s Choice winner 2013 Australian National Portrait Gallery Prize, for his portrait of the late Margaret Olley), the Blake Prize, Olive Cotton Award, Josephine Ulrick & Win Schubert Award; and the publication of his imagery in numerous books and magazines in Australia, China, Germany, USA, Italy, France and beyond.

One work from McRae’s Spot The Arab series (Matuse) is currently featured as a finalist in the 2017 National Photographic Portrait Prize at the Australian National Portrait Gallery in Canberra, and it was also included in the recent thematic exhibition at the Casoria Contemporary Art Museum near Naples, entitled “You no speak Americano original – Integration, discrimination, racism”.

John McRae explains this portrait. “In my studio, I gave Matuse a bag full of clothing and asked him if he would select a “costume” and put it on, which he did. Wearing simple Arab dress, I intentionally depict Matuse as a metaphor for certain prejudices and negative attitudes, conscious or unconscious, that our society at times has been conditioned to project. Here, I  have purposely but subtly imposed such terms as “radical” and “fundamental” onto my willing subject, a modern young man who normally goes about in jeans and a t-shirt. Matuse is of Middle Eastern descent, and he is also a practicing Muslim.  He confronts the camera with openness, calmness and stillness. For him, the clothing is merely fabric, and not a signifier of any political stance or pretext. He also remains an honest young Aussie.”

Matuse is a contemporary musician and performer who calls himself a ‘spiritual rapper’. In McRae’s portrait, it is interesting how the regal symmetry, the formal pose, the ornamental frame and Matuse’s austere attitude make him look stately and in command. He demonstrates an imperial detachment. But he is not expressionless. He approaches McRae’s camera lens with a direct confront. Any initial assumptions about who he might be are totally over-ruled.

John McRae: “As a viewer, can you tell who is Arab, who identifies as Arab, and in the end, how is this important, anyway?”

Spot The Arab, as part of the larger Blow – Up exhibition of contemporary photography at Galleria Il Ponte Contemporanea, is supported by the Australian Embassy in Rome

Spot the Arab will challenge the viewer to identify who of the various models, dressed in Middle Eastern costume, actually identify as Arab. Viewers will also be invited to participate in the SELFIE STAND, an area in the gallery reserved for those who wish to take a selfie dressed in the Middle Eastern clothing (provided) in front of an Arabian backdrop. The viewer is then encouraged to post this image on social media with the hashtag #spotthearab. Once posted, the artist will print the resulting images and then adhere them to a wall of the Backspace Gallery, so that the visitors can become part of the exhibition. 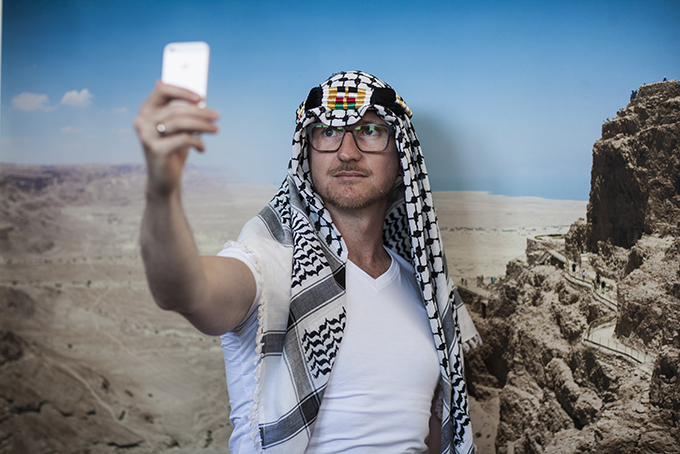